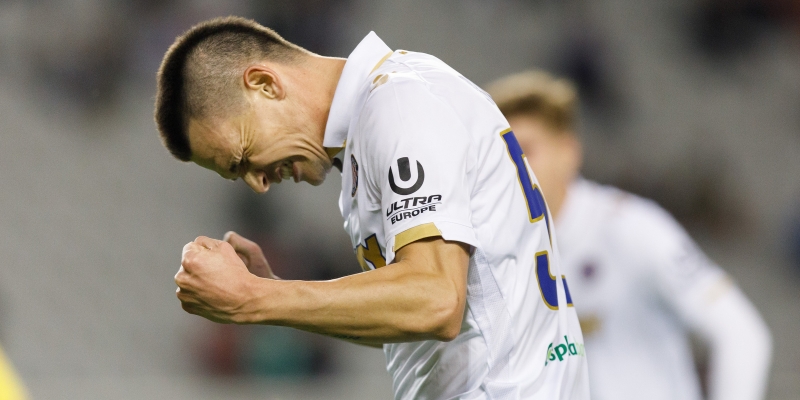 Erceg and Hamza about the match against Inter Zapresic

Hajduk deserved to celebrate in the 11th round of HT First Division against Inter Zapresic at Poljud. They won 2:0, though the win could have been more convincing given the number of chances Hajduk had, but the away team's goalkeeper Krsevan Santini had several good interventions and saved his team from even bigger defeat. Ante Erceg scored the second goal and celebrated it emotionally.

"This goal meant a lot to me. We were aware of the imperative of victory. I announced before the match that an early lead will help us win and luckily Josip Radosevic scored it. Later it was easier. We controlled the whole match and deserved to win all three points. We played a similar match against Lokomotiva, but we conceded naive goals. This is how we have to enter every match, without any calculation, give one hundred percent in each game and then we will definitely win. We are a good team and we have a great coach, that's never been a question. We only had problems with injuries. I believe we will continue winning after the international break" said Erceg after the match.

Erceg scored his third championship goal on the assist of Hamza Barry, who also played a great match against Inter Zapresic. Hamza created several good chances for his teammates, for which he was warmly applouded when he left the game in the 84th minute.

"The system is more or less the same, I just played a little more offensive. We were all good, and I'm happy with how I played even though there is always room for further improvement. I have to be even more straightforward and create chances. In that way I will help the team better. We had a bad period, I hope we will now continue winning. International break is coming, but we are already focusing on the next round against Cibalia and we also want to win that match" said Hamza.